The captain of the Bruvan first ship, which has the honor of carrying Hans von Reichmach, is the noble-born human Tristan Kasteelhof. He is young but has risen quickly in the ranks due to his powerful connections but also his agreeable reserve. He is practical and friendly, but without ever being familiar. He never lets too much be known of his private thoughts. He listens carefully to his advisors and even the simplest sailors, never contradicting or arguing with them, and then he closes himself alone in his quarters for a bit. When he emerges, he gives crisp, detailed orders very clearly, brooking no opposition. If this campaign goes well, he stands to gain a fleet to his command. He is a childhood friend of Kaiser Dieter’s son, and well familiar with his friend’s nightmares. There was also a strange incident with a red dragon in his teen years, but he never speaks of it, and nobody knows how he survived the encounter.

Isla Feen is the female captain of the second ship, a Scipafeen vessel. She is human but seems part elf, perhaps an eighth. She was abandoned as a child in the port town of Cherfidus, became a street urchin and was adopted by a ship with questionable business practices as a scullery wench. The ship often pressured other ships to “trade” their goods for services such as being kept alive instead of slit. Isla made her way up from the hard work in the scullery to swabbing decks and then working in the rigging. She learned how to handle a knife in the scullery when she was five, and when she was nine, they had to toss overboard a body which had lost all its identifying features. She rose quickly in the ranks and became valued for her self-learned navigation skills. At one point when the ship boarded a Scipafeen Navy Galleon, things went differently than planned, and the crew was taken prisoner. When Isla was questioned, the fact that she retained composure and had intimate knowledge of the navigation and strategies of the ship struck the Admiral in charge. Within five years she had converted to the Scipafeen religion, completed the courses at the naval officer academy and was in charge of her first ship. Now a seasoned captain, she is known for her religious fervor, her icy resolve and her firm head in battle. If there is a Scipafeen spy in the expedition, it might well be her quiet first mate, Erik Faust.

Erik Faust, Isla’s quiet first mate is a tiefling, but has led an exemplary life of virtue for a sailor. He is efficient and is known for helping the crew get out of predicaments with locals when they are on land. His intense gaze and obvious horns come to his advantage when he is settling disputes. He was inseparable from a boisterous halfling, his childhood friend, until an accident with a drunk sorcerer while the friend was on shore-leave cost the friend his life. Erik tolerates no magic in his presence.

The third ship is captained by Stev Fladoff, son of a disgraced Bruvan dwarf warlock who was executed for excessive and gross magic practices. His father gambled for power but lacked the skill to hide his tracks and carry it off. Stev’s mother is the daughter of a resourceful gnome innkeeper, and she returned to the inn with Stev after her burly warlock husband was burned at the stake. The shrieks and moans of his burning father rang long in his ears as a warning during his formative years. In stark contrast, his garrulous grandfather’s hospitality taught him a practical ease which makes him a popular leader. His crew is willing to follow him anywhere because they know where he came from and can identify with his journey. He doesn’t like serving along Isla because she is a woman, but he does begrudgingly admire her practical smarts, and his mind often wanders to her when he has time alone in his cabin. The thought of ruffling her composure with his gruff lust has helped him pass the lonely nights and crash sooner into a spent slumber.

General Clanless Llathryn is a dragonborn who serves Bruvan in place of clan. The uncle of Kaiser Dieter saved a silver metallic dragon egg from the purge of a religious zealot and raised Llathryn along with his own three sons and single daughter. Llathryn developed a strong allegiance to the royal household, attended Bruven’s Felsfeld Brigadier Institution and devoted himself to military conquests to strengthen Bruven’s strategic advantages and reduce their dependency on Orcus’ favor and the influence of the bloodthirsty Children of Orcus. It is a secret source of shame to him that he is not tortured by the same nightmares which plague his siblings, and he would do anything to rectify their situation, as long as it didn’t harm Bruven.

Image by Zoltan Tasi on Unsplash 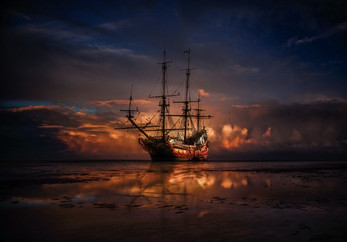