You awaken at dusk in the hall of the top floor of your boarding house, a building cobbled together over several centuries, with only vague memories of the night before, soreness radiating from an odd mark on your arm. Last night, hearing strange music coming from the room of Erich Zann, the only other boarder on this floor, you had crept into the hall. Strange music, not weird or modern, but deeply unsettling. The music seemed to abide by all the conventions, but the effect on you upon hearing it was like that on the eyes when seeing the photographic negative of an image. Misplaced and jarring, it was as if the silence were louder than the tones, pressing through and imposing itself on your consciousness. It was this roaring of silence that was the last thing you remembered…

Coming to, you hear no sign of the musician. This could be your chance to enter the bedroom and look around.

You notice an old-fashioned key lying on the floor.

You hear a brief whisper, gone before you can identify its source. You reach and lightly tap the heavy wooden door. It swings open. The last evening sunlight slips from the high window, catching dust motes in its departing shimmer.

You enter the room hesitantly. Inside, you see pages scattered on the floor. There is a violin case on the dressing table. The pages might help decipher the nature of the strange music you heard last night.

They are covered in spidery lines and crawling with notes vying for space on nearly transparent manuscripts. Brushing them, you are startled by a persistent low vibration coming from an instrument hanging on the wall. You approach, pages still in hand.

Shuffling pages, you feel the instrument tremor. You take the most elaborate page. Two of the writhing creatures on the Nosatalabe align over a curved symbol ending in a tight spiral.

Are there any clues evident near Zann’s bedstead? Did he spend the night there?

Zann’s duvet is thin and worn. When lifted, it shows discoloration in the form of a body as if it absorbed much sweat at night. The bedstead had been shoved slightly aside.

Plaster on the wall at the headboard bears claw-like marks. Something dangles from a barely visible indentation. Claw marks are more numerous around this opening.

The low vibrations, which you had almost ceased to notice, stop abruptly.

You wander to the violin case on the dressing table. The violin has a deep red varnish brushed over golden wood. In contrast to everything else in the room, it shows no sign of wear. It does not, however, look new or unused but exhibits the clean, uncorrupted lines of intensely focused purpose. The bow is a dark burgundy wood glowing with an inner fire.

Looking at the violin brings back memories of your childhood. You used to play violin with your sister until her tragic death in a carriage spill. Your eyes close briefly in pain, seeing past rainy days and how the soft tones Clara played on the piano wrapped like a silky blanket around melodies you strung together slowly like individual pearls.

The sinewy strings on Zann’s violin appear new, not even discolored or unraveled by the inevitable contact with Zann’s busy fingers. Behind the case there is a pile of curled, snapped strings. Perhaps profuse sweating from his obsessed frenetic playing disintegrates new gut strings at such an abnormal rate. You have never seen that many discarded strings at once, perhaps fifty or more. None look old, all snapped by stress rather than frayed by use over time.

Impulsively, you reach for the violin and bow. The violin is cool under your chin. When placed on the strings, the bow is light and quick and seems to move on its own.

You examine the music. You are surprised to recognize it and have actually played it often. The piece alternates between desperate racing and grand broad vistas of sound. With a pounding introduction on the piano, it was one moment when you had thought Clara might not be able to hold her own musically due to her sweet disposition. As you had wrung your violin for every bit of power, you felt a surprising gritty determination well from underneath you and transport the violin in its sway at the thudding mercy of the piano’s rhythmic swell.

Gone was the pounding, forever. You stare at Zann’s violin. Almost unwillingly, you play the hollow sequential octaves that start the piece. Two notes. The same sound, but separated. Then the composer played a cruel trick. The top note pushed, driven up a half step, then relaxing back to the octave, as if nothing had occurred. Jarring dissonance, but fleeting. The inappropriate closeness of a half step made unbearable by juxtaposition with the largest possible distance, an octave. Were the notes close or far? Unified or clashing? They were clashing from afar, with no hope of being reunited.

A distant knocking, perhaps a horse passing in the street.

You play on, the beautiful, sad melody warming your cheek with tears, as nothing has warmed you for ages. You would like to stop and cry your fill, but the octaves return, harsher. Now it sounds like couriers are racing up and down the street. Or perhaps it is someone in the building, on pressing business. You remember the boarder downstairs has been ill and feverish. Someone sent for the doctor? The pounding becomes more urgent. Time is lacking.

The wind increases. The dark outside the window is no longer mere night but is the pressing dark of brewing clouds. Their black conceals the pressure of hurled rain and electric tension. It is flinging the wild trees to tap their distress against the high panes. “Why won’t the wind let us rest,” they screech across the glass?

Still playing the ninths with their impossibly distant resolution, you realize there are no trees this high. Your bedroom’s grimy window looks onto a neighbor’s teetering roof. Zann’s window faces over the city wall into barren mountains and rugged cliffs where darting creatures roam.

You try to wrest yourself from the violin’s grip just as the panes smash inwards, spilling her broken body into the room.

(Note: this has been slightly modified from the original 1000 word jam entry to become part of one of my text adventures. Image by Chronomatopoeia.)

Embalmed in poetic prose, and troubled characters, is something that speaks deeper to the starving loneliness innate to humanity.

Amazing use of language. Bravo. 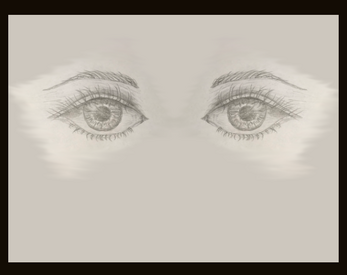